The first organized rugby match was played in Key West, Florida when Dad Pap took a team down to play a British frigate. The outcome of that match sent the University of Miami team back to Miami wondering if they should not leave well enough alone and go back to playing football, baseball and other very American sports. Well, a few weeks later, after their ego re-inflated, they were on the road again visiting the University of Florida. Little was known about the rugby camp in Gainesville.

In a role reversal, the boys from the South came marching up from Miami and the boys from Gainesville were hiding behind rocks and trees. As you might have guessed, history was written that day when the University of Miami beat the University of Florida in the first interstate [sic] rugby match that is considered the “great grandfather” of our present day competition leading to a state champion.

From 1969 to early 1974 not much happened in Florida, but during that time at the grass roots level, small groups of players were banding together to form clubs and starting to talk about a Union.

In 1973, there were several meetings held in Orlando attended by Jacksonville, Orlando, Tridents, University of Florida, University of Miami, and University of South Florida. The outcome of these meetings was the formation of the Florida Rugby Football Union in 1974. John Clements, a Welshman of long standing rugby experience and one of the driving forces behind the development of the Union, was elected President. The Union was very small at the time and the only other officers elected were Roy Brewer (Univ. of FL) as Secretary/Treasurer and Peter Gibson (Univ. of SFL) as Vice President.

During 1973-74, rugby on the field was developing slowly while administration was advancing rapidly. Florida clubs were regularly being beat by visiting ships and clubs from the Georgia Rugby Union.

The following year, the Florida Union put together a 35 man traveling squad and went to Athens, GA where the Florida and Georiga first and seconds played. The Florida first team won overwhelmingly 32-9 and the seconds rose to the occasion by beating Georgia 21-12.

In 1976, still under the leadership of John Clements, who by this time had also become involved in the ERU, the Florida Rugby Union sent two teams on tour at the same time. The first team was off to Philadelphia to play in the bicentennial tournament that was made up of four US sides and four top ranked British sides. At the same time, the second team was playing the Saracens in the Bahamas. From 1975 to 1980, rugby flourished in the State of Florida going from eight clubs to twenty-two.

During that period, the Union was gifted with three strong presidents: John Clements (1974-77), Bill Cusselle (1977-78) and Kevin Kitto (1978-82), who helped give the Union direction and a degree of professionalism.

While still very strong in 1980 on and off the field, the Florida Union and its member clubs started to feel the natural attrition which is to be expected in any organization. The players of 1969 & 1970 were 10 years older and 10 years slower, the number of clubs declined but surprisingly the level of play remained high and in many clubs increased markedly.

After a stagnant period (1980-82), there seems to be a resurgence in the state. Rugby is moving again, new clubs are forming, the Florida side is traveling and winning. Florida players are playing on the South and ERU squads. Our fourth president, Jim Millar, has taken on the task to build an even stronger administration for the Union. At the same time, Florida coach Tony Casserely, a fairly new face in Florida rugby but with a longstanding career in first class play, has committed himself to the task of piloting the Florida side to National prominence. 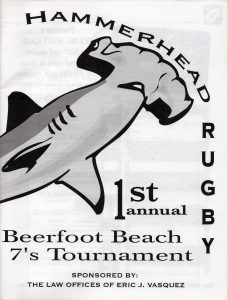 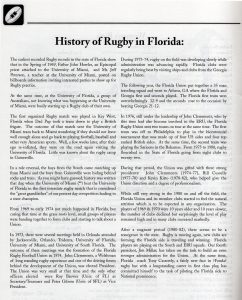 Please email the FRU secretary with additions to these records